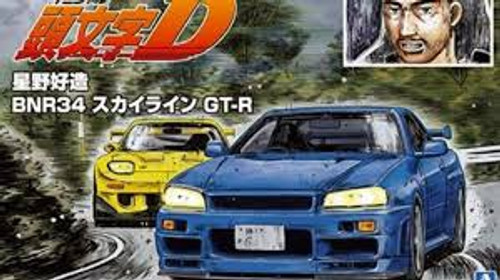 Aoshima #5733 1/24 Nissan BNR34 Skyline GT-R Kozo Hoshino"s . One of the top racers from the Ibaraki area team Purple Shadow, we bring you Kozo Hoshino's BNR34 Skyline GT-R. Due to his acceleration control skill and ability to drift the heavy GT-R, Kozo received the nickname of "God Foot". During his battle against Keisuke Takahashi, he once passed Keisuke but eventually lost due to excessive tire wear.

This kit will measure about 191mm long when completed.