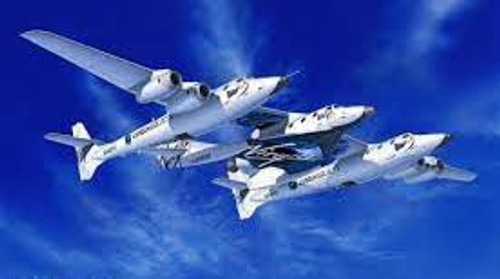 Revell #04842 1/144 Spaceship Two  & White Knight Two The Scaled Composites Model 339 SpaceShipTwo (SS2) is a suborbital, air-launched spaceplane designed for space tourism. It is under development as part of the Tier 1b program under contract to The Spaceship Company, a California-based company that is wholly owned by its sister company Virgin Galactic. The Spaceship Company was formerly a joint venture between Virgin Galactic and Scaled Composites, but Virgin became the company's sole owner in 2012.

SpaceShipTwo is carried to its launch altitude by a jet-powered mothership, the Scaled Composites White Knight Two, before being released to fly on into the upper atmosphere, powered by a rocket motor. It then glides back to Earth and performs a conventional runway landing. The spaceship was officially unveiled to the public on 7 December 2009 at the Mojave Air and Space Port in California. On 29 April 2013, after nearly three years of unpowered testing, the spacecraft successfully performed its first powered test flight.

Virgin Galactic plans to operate a fleet of five SpaceShipTwo spaceplanes in a private passenger-carrying service, starting in 2014, and have been taking bookings for some time, with a suborbital flight carrying an initial ticket price of US$200,000. The spaceplane could also be used to carry scientific payloads for NASA and other organizations.